These finalists need no introduction to Rochester. Between Patrick and Ahmed, both have already been here a total of eight times – three for Ahmed and five for Patrick.
As for the final, the excited Rochester crowd could not have asked for a better scoreline.
For the Egyptian from Alexandria, this was his maiden PSA tour title success, which makes it that much more special. He promises to return next year to defend his title.

VIDEO (by Paul Schwartz) – Chifunda-Hamza in the final: 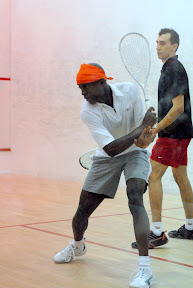 Patrick Chifunda vs Ahmed Hamza in the 2008 Rochester ProAm Final

As many now know Patrick and Ahmed have a long history of closely contested matches. One reason rests in the differing styles each plays. Neither conforms to the otherâ€™s style while relentlessly trying to impose their game on the other; this lends itself to exciting squash often going a full five games. This match was no different.
The opening game was played at a frenetic pace at times, which Patrick clearly favored. His fitness and attacking shots served him well jumping out to an early lead. Ahmed was a step slow and unable to match Patrickâ€™s tempo. Patrick was able to dominate the center of the court and slip in a few crosscourt kills to put an exclamation point on the first game.
Ahmed adjusted his game a bit in the second by playing better length and taking advantage of loose balls that his tight length created by attacking to the front. This game was marked by scintillating retrieval and reflex shots by both players. This was the game that electrified the crowd and got everyone into the match. Patrick was unable to answer without making several unforced errors that kept Ahmed ahead by a point or two throughout the game. Ahmed also slowed the tempo and frustrated is opponent slightly and took the second. This was a glimpse of things to come.

In the third game Patrick reaped the rewards of the high tempo he maintained in the first two games of the match. Ahmed was visibly tired and tried to delay and create let situations, but Patrick would have none of it. Patrick was again pushing Ahmed to the back of the court with good length and volleying anything coming across the court, and ultimately forced errors from Ahmed. He ran away with the third game 11-5.

Playing more desperate squash, Ahmed picked up the pace with penetrating straight lengths along with some appropriately timed boasts to keep Patrick off balance. As both players pressed the pace, fatigue crept in to cause more physical contact and stoppages, which clearly favored Ahmed. Although Patrick steadied his game and played more basic squash to cut down on errors and tire Ahmed, it was not enough to counter Ahmedâ€™s opportunistic crosscourt kills and tight drop shots. Once again these two would have to go to the fifth game to decide a winner.

The players played cautiously in the final game neither one wanting to make mistakes or open the court to their opponent. Both played medium pace up and down both walls to keep rallies neutral with some drops thrown in for variety. The score was always within two points as the game wore on. Everyone was on the edge of their seat with each long rally. Late in the game Patrick decided to pick up the pace again and moved Ahmed around the court with dying length balls to the back wall and short kills to the front. Patrick drew even at 9-9 and it looked like he had finally broken through and Ahmed would fold, when he tinned a ball giving Ahmed match ball. Ahmed sensing victory did not take long to capitalize, when on the next rally he hit a short straight kill that Patrick could not reach. As always they produced a memorable match and one certainly worthy of a final match. Congratulations, Ahmed!

Posted in 2008, All Tournaments
Twitter
Tweets by @squashrochester
Archives