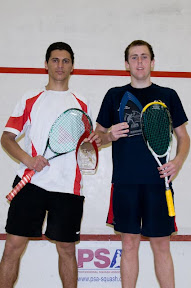 The sunny Spring morning did not keep the local squash fans from packing the University of Rochester squash facility to watch Ryan Cuskelly of Australia play Amr Mansi of Egypt. Both players made it to the final with 3-1 wins the night before. Cuskelly overcame Bernando Samper and Mansi outlasted Adrian Waller.

Game One began with steady rails from Amr to Ryanâ€™s backhand and low cross court drives that moved Ryan to the back corners. Amr uses his boast to catch Ryan off balance and to force him to scramble for the ball. A 3-1 lead for Amr erodes after his two tins in a row. At 3-3 both players keep each other moving to both sides of the court. The long rally ends in a let, much to the chagrin of Ryan. He felt that a stroke was in order for Amrâ€™s loose shot. Play resumes and Ryan goes on to win the next point and to take the lead 4-3. Another 1 plus minute rally ensues with both players making great retrievals from front rail drop shots to high cross court volleys. The point ends with Amrâ€™s tin. Amr fights back to 4-5 with a fantastic boast from the backhand corner that nicks the front side wall before Ryan can reach it. At this stage of the game Ryan starts taking control of the play and seams to be in a comfortable lead at 7-5. Amr shows his tenacity and confidence with his continued use of the boast to move Ryan off of the T and into the front corners. Both players trade points and at 9-6 Ryan objects to the refereeâ€™s denial of his let and request for a stroke. Amr gains two more points to get to 9-8. Ryan responds with a soft drop shot to the front corner to end the next point and to set up match point at 10-8. The game ends with Ryan placing a winning counter drop shot that rolls into the side wall nick beyond the reach of a stretched out Amr. Ryan wins game One 11-8. 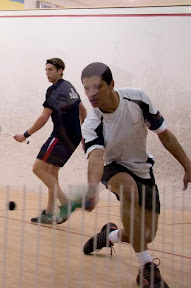 Game Two starts off the same as Game One with Amr using his rails and cross courts to move Ryan. Amr applies more power to his shots while Ryan appears content to retrieve and to keep his rails at a medium pace. Amr jumps to an early lead and is 2-0 before he gives Ryan two unforced errors to even the score at 2-2. Amr regains the lead due to a stroke against Ryan and moves to 4-2 with his continued use of the back court boast. Ryan wins the next point and gains another from Amrâ€™s tin. At 4-4 Ryan uses a nice racquet hold at the front wall before driving the ball past the unsuspecting Amr. Ryan continues to push Amr to make riskier shots and benefits with a 6-4 lead. Amr appears strong physically, but Ryan is showing more spring in his legs. Both players trade points and end up in a similar situation as in Game One. Ryan has the lead at 9-6 thanks to another shot into the tin from Amr. A great 2 minute plus rally begins with both players using all types of shots against each other. The crowd is mesmerized by the amazing ball retrievals and recoveries by both players. Ryan looks in control until Amr was able to get him into the back corners and force Ryan to leave him a weak return that Amr pounded deep into the back corner. Ryan regains his form and wins the next point to go 10-7. Match point ends with Amr hitting his rail into the tin. Ryan wins Game Two 11-7.

Game Three was crucial for Amr to keep his errors down. Both players come out strong with the first three points traded between them. At 3-2 in favor of Amr the audience sees a similar pattern begin. Amr hits two tins to give Ryan the lead at 4-3. It appears that fatigue is showing up in Amrâ€™s body language as he begins to struggle with Ryanâ€™s aggressive playing. Ryan gains the next two points before Amr counters with a fantastic cross court volley into the nick. Both players tin their shots and at 8-5 the game is still too close to tell who may win. Ryan uses a reverse corner shot to fool Amr. At 7-9 Amr benefits from a loose ball into the middle of the court and wins a stroke. After a great rally ends in a let call Ryan wins the point with a well placed backhand cross court nick. At 10-8 Ryan is playing match ball with a visibly tired Amr. Despite his exhaustion Amr shows his mettle by keeping up with Ryan. Four long rallies end in lets before Ryan wins the last point after a minute plus rally pushes Amr to the end of his energy level. Ryan wins 11-8 and the match 3-0.

The Rochester Pro Am ended the weekend with a successful event in terms of player quality, match excitement, fan participation and support, and the organizational support of the Rochester Squash Racquets Association.