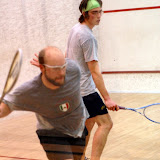 With a week until the professional event begins, Rochester’s squash community is one step ahead and will get in on the action in advance this weekend as 37 amateur squash players will compete across three skill levels in the 2010 Rochester City Championships, an annual tradition and the “-Am” in the ProAm.
The amateur event will be played at the Genesee Valley Club courts. Thanks to Bell Racquet Sports, Rochester’s only squash store, for sponsoring prizes. The final matches for each skill level will be held a week later on Sunday April 25th at the University of Rochester courts just before the pro final begins.
This year’s amateur event promises a strong 4.0 (Intermediate) draw with 18 players. The 3.0 (Beginner) draw will also feature participation from the University of Rochester’s growing body of squash playing student enthusiasts.
The 5.0 (Advanced) draw promises some exciting matches and includes former Princetonian Brendon Bascom, Rochester squash stalwart Jonathan Hager and UR Yellowjacket participation through assistant coach Chris Fennell & team member Edwin Goncharuk.