Thankfully volcanic ash has not interfered (yet!) with the itineraries of our visiting professionals as they make plans to drive/bus/fly from around the country and the world to the homes of their host families in Rochester.

#1 seed and world number 68, a healthy and determined Cesar Salazar from Mexico will return to Rochester a second time after he faced an early round defeat in 2009 in the midst of illness and fatigue. He is accompanied by four other compatriots from Mexico including Armando Olguin, a Rochester regular and squash pro at the San Francisco Bay Club.

#2 seed Karim Abdel Gawad from Egypt is on a high having qualified at the $42K Heliopolis Rotary Open in Cairo this week after beating #49 ranked Mohammed Abbas. He subsequently lost to #24 Hisham Ashour in a tough 4 game match the next round but will be looking to keep that momentum going next week as one of the top seeds in our event.

It is going to be a melting pot as usual next week with players from Australia, UK, Canada, Mexico, Egypt, Nigeria, Denmark, Switzerland, Finland, France, Peru and the US. The two American players in the qualifying draw include Graham Basset and Ned Marks both from Greenwich, CT. 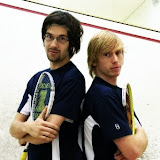 The event will also feature the top 4 Yellowjackets from the nationally ranked #4 University of Rochester Squash Team including Benjamin Fischer as a wildcard and Jim Bristow, Hameed Ahmed and Andres Duany as locals.

Making a comeback on the PSA tour this year is former Rochester champion from 2004, Karim Yehia. Playing as a local, Karim, who has been off the tour since 2007, will have to work hard against stiff competition in the qualifying round if he wants to reclaim his former title.

The action begins with the first qualifying round at the Lyman squash courts at the University of Rochester on Tuesday at 6:00pm. (Schedule of events). See you at the courts!

With Google+ plugin by Geoff Janes and Thorsten Hake