The 2011 Rochester ProAm men’s final came down to the two players that performed consistently throughout their main draws. Wade Johnstone (Australia) and Alfredo Avila (Mexico) survived over 90 minutes of squash the previous evening. They won their semifinal matches in front of a packed gallery and found themselves face to face on the University of Rochester court at 12 noon Saturday. 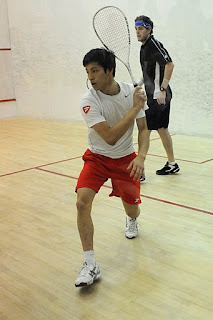 Game 1:
After their introductions the players initiated their match with steady pace and conservative shooting. After over two minutes of back and forth rails and cross courts Alfredo pumps his shot into the tin to give Wade the first point of the match. The second point followed the same pattern as the first with Wade placing steady shots around the court but Alfredo hits a winner to tie the score 1-1. Alfredo shows his skills on the next point as he crushes an overhead into the nick to make it 2-1. An error by Wade on his back court boast adds another point to Alfredo.
Finally, Wade takes advantage of a loose shot by Alfredo and hammers it into the rail for a winner. Another long rally at 4-2 Wade starts working the boast to force Alfredo into more diagonals and catches him leaving a weak return that Wade drops to the front left corner to win the point. An error by Alfredo gives Wade 4-4 tie. The pace of the shots is picking up with each player pushing each other deeper into the back corners. As Wade uses his boast, Alfredo shows his flexibility as he stretches for each shot to keep it in play. Wade plays a poor shot to give Alfredo a 6-5 lead. A great drop and counter drop sequence in the front right wall ends with Wade hitting good length to get it out of Alfredo’s reach.
Wade goes up 7-6 on another loose shot by Alfredo. Wade continues to roll and at 10-6 he puts the finishing touch on his drive and closes the first game 11-6.

Game 2:
The second game starts quickly with Wade getting to 3-1 on two tins by Alfredo. It doesn’t take long for Alfredo to catch up with his deceptive rail and an error by Wade. At 3-3 both players are using their shots to put pressure on each other. Alfredo appears to be getting the better of it by forcing Wade to retrieve boasts and scramble toward the back walls. Wade starts lobbing more but Alfredo is up to the challenge by playing them in the air and forcing Wade to use more energy to retrieve them. At 5-4 Alfredo picks up another point from Wade’s tin. This is followed by another missed drop shot and a second one as Wade tries to end the points sooner. The score is 6-4 with Alfredo showing confidence in his shooting. Wade gets a stroke from Alfredo, but the game swings back to Alfredo as he goes 8-5 with a low cross court winner.
The crowd is enjoying the non-stop retrieving by Alfredo as he scrambles around the four corners of the court. A great point ensues with both players retrieving their opponent’s shots well. The point ends on a stroke given to Wade. The score goes to 9-7 with Alfredo gaining the win on two more tins by Wade. The game ends 11-8.

Game 3:
Alfredo is back on the court first after the break. His win is giving him more confidence against the more experienced Wade. Despite the confidence Wade goes 2-1 in the first 2 minutes. Both players trade tins and Alfredo gets to 3-2, then 4-2 after another tin by Wade.
Both players continue to deploy the back court boast and front wall drops to move each other around. Alfredo continues to look energized despite Wade’s efforts to force him into tougher retrievals. The score is 5-5 and Alfredo holds his own on a cross court return that he hits tightly down the rail for a winner. The next point finds Wade diving for a back wall shot. He stays in the point for two more shots before Alfredo hits a winner that is out of reach. Wade fights back to 7-7, but he tins another potential winner to give Alfredo the lead again. The game ends on three errors from Wade and concludes 11-7 in Alfredo’s favor.

Game 4:
The 2-1 lead sets up the extra pressure on Wade to get a lead on Alfredo. He gets help from Alfredo who tins the first two points. If it is nervousness it does not last long. Despite a 0-3 situation, Alfredo fights back to 3-3. Wade pumps a shot into the tin to give the lead back to Alfredo 4-3. The back wall retrievals are becoming tougher on Wade. He finds himself down 7-3 after only five minutes of play.
A great point starts with the players using all four corners multiple times with great retrieving by both players. Wade tins the last shot to give Alfredo a look at closing out the match at 10-3. Wade wins the next three points and appears to be making his way back into the game, but he does a shot that lands in the tin to end the match in Alfredo’s favor 11-6. Alfredo wins his first Rochester Pro Am 3-1.
Both players received a standing ovation for the great play and for the week of exciting matches that they participated in. The Rochester squash community hopes to see both players again, either back here or progressing in one of the other PSA tournaments. 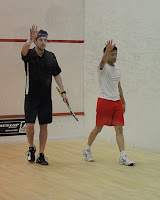